Taguspark’s latest attraction, made from 5,200 rubber slippers taken from the Indian Ocean and 156 kilos of waste collected from landfills, is 5.6 metres high. The representation of this giraffe alerts, according to the International Union for conservation of nature, of its threat as an endangered species.

The title of the sculpture, alrelated to the contributions of the French scientist Antoine-Laurent de Lavoisier, pays homage to his avant-garde thought and his discoveries in the fields of chemistry and biology. Also known for mentioning that “in Nature, nothing is lost, nothing is created, everything is transformed”, Lavoisier refers, indirectly and in a context adapted to contemporaneity, to the impact that the human being has been exerting on the planet.

The “Lavoisier Giraffe” produced by Ocean Sole, a Kenya-based NGO in partnership with United to Remake, a start-up installed in the Taguspark Incubator, was carved by the hands of five artisans, who daily and without recourse to any machines, collect discarded slippers in the ocean and give them a new purpose.

The sculpture, faithful to the anatomy of a giraffe, took 99 days to take shape. It is a unique artistic piece, in full size, and the largest ever made by the artisans of the NGO. Considered the largest ruminant and tallest mammal on Earth, the giraffe, like the recent sculptural representation in taguspark, has a particular impact on the public due to its size and pattern reminiscent of mosaics. The “Lavoisier Giraffe” awaits your visit in the City of Knowledge, in the Central Core of Taguspark! Admission is free. 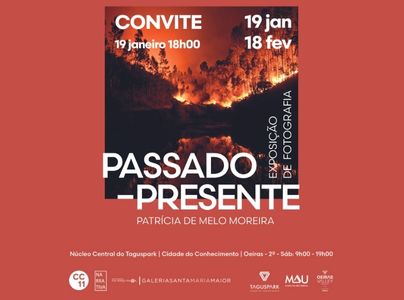 Passado-Presente is the first exhibition of individual photography in Portugal by photojournalist Patrícia de Melo Moreira and will be on display at the Central Core of Taguspark, from January 19 to February 18. Admission is free.

Simply Ruy takes the stage from January 18, in the Taguspark Auditorium.